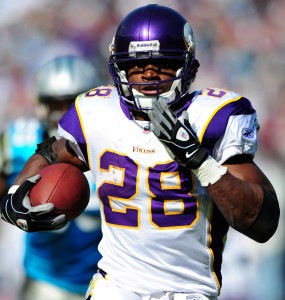 I’ve been a longtime NFL fan.

My earliest childhood memories include watching games with my parents and hearing grandpa grumble about how much he hated the Dallas Cowboys.

A couple days later, we had a Fantasy Football draft at my house. In Kell family style, my two sons and I got decked out in our Vikings jerseys. Football has provided some solid fun in our family.

But things haven’t been quite as fun the past few weeks.

This isn’t because my Vikings are striving for mediocrity once again, but rather it’s because of the stench that surrounds all things NFL. The league has been oozing headlines about domestic violence scandals, concussion cover-ups, and most recently child abuse charges against my favorite player, Adrian Peterson.

My aunt, who is a Patriots fan, wrote me this week and said “what is happening to our beloved game?…I was going to email you before [the Pats and Vikings] game last week but AP took all the fun out of that.”

To add to the nauseating situation, we’ve seen the NFL execs’ lust for money broadcast in high definition. The waffling of the Panthers, Ravens, and Vikings organizations in the handling of their respective scandals has been directly tied to public outcries that threatened to cost them money, lots of money.

All of this has left a bad taste in my mouth toward the NFL and toward some of the players, including Adrian Peterson. Right now his jersey is hanging in my closet, and I’m not sure what to do with it.

To be clear, I never wore my AP jersey because I thought he was the model of morality. I wore his jersey because he’s an electrifying player who helped my team win. Granted, he also seemed to be an upstanding young man, and even professes to be a Christian. I respected his posture off the field, and that made it easier to wear his jersey.

But with everything that has come out about the apparent child abuse, I have been debating whether or not I’ll ever wear it again.

Though this wardrobe decision is pretty low on my priority list, the way I think about the NFL and its players is more important. I’ll keep it brief, but I’d like to share two lessons I’ve taken away from my consideration of all this NFL nastiness.

Jesus said, “You hypocrite, first take the log out of your own eye, and then you will see clearly to take the speck out of your brother’s eye” (Matthew 7:5).

In those piercing words Jesus warned against pointing out other people’s sins while not first addressing the sins in your own heart. This is where I have found some much needed correction.

Before I point the finger at what I perceive to be money-hungry executives and the Ray Rice and Adrian Petersons of the world, I need to first look at the nastiness in my own heart.

Can you guess what the first thing was that I thought about when the Peterson news broke a few days ago? I thought about how it affected my hopeless Vikings and how it would impact my fantasy football team.

I reduced Peterson to a commodity and the abuse of his child to an obstacle to my sports enjoyment.

How sick is that?

Left to myself, I’m just as greedy and self-interested as the people I was criticizing.

Does that mean I can’t critically think and speak about their wrongs? Of course not. Jesus didn’t tell us not to judge others, He told us not to be hypocrites when we judge others (Matthew 7:1-5). What it does mean is that I must prioritize the examination of my own heart. I must come face to face with the fact that I’m not all that different from the people I was criticizing.

My selfish, consumeristic mindset defaults to using people rather than loving them. My self-righteousness strives to find a reason to condemn people rather than care about their ultimate good. My pride looks at the sin of others and tempts to be less convicted about my own sin. (Adrian abuses his child?  I guess my raised voice or harsh words to my child aren’t so bad after all).

How dangerous is that?

Child abuse and domestic abuse are heinous evils and need to be prosecuted to the fullest extent of the law. But as I wrestle with all that is happening in our world, I must not avoid examining the evil that remains in my own heart. If I neglect this work, I fear how far I could wander into the darkness of my own sin.

2. Human heroes will always fail me.

Thankfully, I’m not enslaved to sports anymore. My afternoons aren’t ruined when my team loses and my heroes are no longer men in tights running through a field carrying a piece of dead pig. Maybe I’ve just grown calloused because of all the sports heartbreak over the years, but I’m hopeful that it is the Lord changing my affections toward eternal things (Colossians 3:1-3).

Through all of this, I’ve come to realize that while we can admire people for the way they play sports, we should never make them our heroes. Why? Because ultimately, they will fail us.

Sure, not everyone will act in the grievous way Adrian Peterson is accused of acting. But the fact is that all people, even the best of people will fail us.

What it does mean is that we must never forget that Jesus is the only One who will never put us to shame when we associate with Him (Psalm 25:3, Romans 10:11). In fact, He is the One who graciously covers the shameful sins of all those who draw close to Him in faith.

Christ is the never-failing One who promises grace and forgiveness to any who believe in Him. This promises is extended to child abusers, greedy executives, and hypocritical self-righteous preachers like me.

That is the beauty of the Gospel. Jesus is the hero who rescues us from the depths of our sin and now promises to never leave those who come to Him (John 6:37). No other person can ever promise that.

Trip Lee’s song about Jesus being the ultimate Hero captures this well, check it out here.

So will I ever wear my Adrian Peterson jersey again? I’m not sure yet.

If I do, it won’t be because I condone his behavior. It would be because of the way he responds to this incident and because I respect him as a player.

If I don’t, it won’t be because I think I’m a better person that he is. It would be because I wouldn’t want to send a confusing message to those who might see me wearing it.

But in the end, what matters isn’t if he or anyone else ever wears a #28 jersey again. What matters is if God will bring healing to his children, reconciliation in his family, and transformation to his life. We should pray and ask God to do that.

I could only hope you would do the same for me if I were the one wearing his jersey.

4 thoughts on “Can I Ever Wear My Adrian Peterson Jersey Again?”