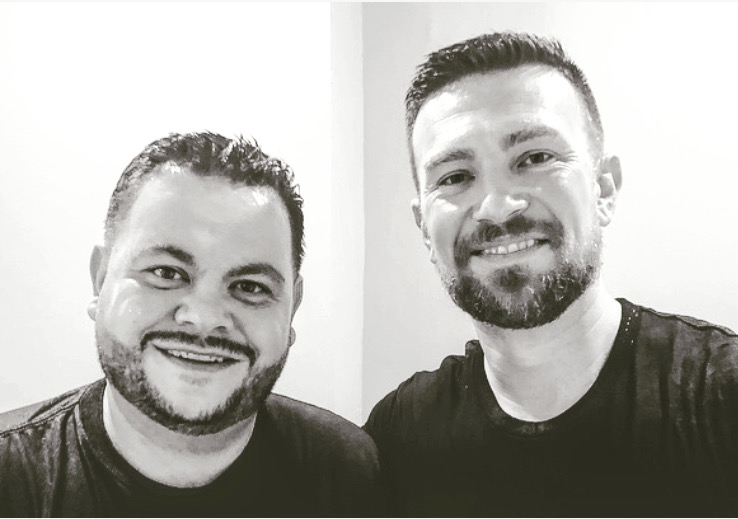 Today I had the honor of baptizing my friend Greg. We’ve been meeting almost every week for the past ten months and he was just recently born again. In many ways, Greg is the last guy who would ever become a Christian. His life was marked by pain, drugs, immorality, and death. Yet, on the other hand, his conversion is just the sort of thing God loves to do. God delights in taking people who are far off and bringing them near through His grace in Jesus.

Here’s the testimony Greg shared with our church this morning. Praise God.

“My name is Gregario Colon III and I was born in the Bronx, NY with my older sister and younger brother who absolutely mean the world to me.

Looking back on my life I realize how blind I was to God’s grace. My earliest memories were filled with tragedy and now I see why I so often played the victim. My neighborhoods were infested with drugs and both my parents were addicts. One of my earliest memories was on Christmas morning when I came out to find my dad sitting next to the milk and cookies we left for Santa with empty syringes sitting on the plate. These kind of memories were always confusing to me as a kid.

We went to live with my grandparents who did their very best to give us a childhood despite our parents disappearing from our lives. My grandparents knew where my dad lived and one day took me to visit him. I still remember seeing my grandpa talk to him, watching my dad look at us, wave us off, and then walk back inside his house.

When I was twelve, my grandpa took me to watch one of his stickball games. But during the game, he collapsed of a heart attack and died in front of me. He was the closest thing I had to a father, but then he was gone!

During high school, I was out of control. At one point I got caught stealing and was sent with my brother to live with my dad who had begun to get sober. I resented him at the time despite the fact that he tried hard to make things up with us. I began hanging out with older kids in our neighborhood, which put me on a path that would cross more lines than I can bear to think of.

It was about this time that I began cutting hair as a hobby. My dad got me my first set of professional clippers for Christmas and allowed me to cut hair on the roof with people from the neighborhood. That’s also when I started getting mixed up with drugs and alcohol. What began as just having fun quickly became an everyday thing for me.

At this point, I was angry, violent, and lost. My downward spiral became a blur when my father passed away from complications with AIDS. I didn’t know how to deal with his death or my emotions about his attempts to reconcile with me. I went to his funeral drunk and high—it was one of the worst days of my life.

Eventually, I moved back to the Bronx and rented a room in a crack house where I began dealing drugs. During this time I saw my stepdad die on my mom’s couch and within a year I watched my mother drink her self to death. Near the end I asked her, “mom, why can’t you get help and clean yourself up” and she said to me “Greg, of all my kids, you should be the one who understands.”

Haircutting was my refuge. It allowed me to make decent money, which led to all-nighters at nightclubs, bad relationships, new kinds of drugs, and coming face to face with death. I’ll never forget seeing one of my best friends shot to death in front of me. It should have woken me up, but instead pushed me on a darker path of dealing drugs. You might say I picked up his clients and ran hundreds of pounds of drugs across borders. This afforded me more money than I knew what to do with but also left me constantly worried about who was trying to kill me.

Eventually, my world came crashing down when I was arrested on serious drug trafficking charges. The charges were reduced, but I spent time in rehab in Upstate NY. In 2012, I moved to Virginia in another attempt to clean myself up. This lasted for about two years. Haircutting really took off for me, and I even landed a gig cutting hair for the Redskins. It was during this time that I met my friends Scott and Mike McKinley (who is a pastor) who are here today.

My family was proud of me because I had gotten my life together (but not really). You see during that time a doctor began prescribing pain pills for me. I got hooked pretty hard and when he stopped writing me scripts, I moved on to heroin. I began burning bridges with friends and family and soon enough I was back on the dark path heading toward death.

One day after a hair cut Mike McKinley asked me, “Can I pray for you?” I was like whatever dude. He also gave me a book he had written with a guy named Mez. Later I found that he left a $20 bill inside to bless me, but I took it and used it to buy drugs. I was spiraling out of control. After one of my overdoses, I remember waking up in the hospital and my sister saying to me, “you are going to end up dead, is that what you want?”

I entered a detox program here in Alexandria and afterward moved into a recovery home for a year to work on my sobriety. During this time I met a lady named Karen Solms along with many other dear friends. I would see Karen going through such hard things but always trusting God. I asked her how she did it. She would always point me back to her faith in God.

One day Karen invited me to come to church with her. She said she had heard a pastor from Scotland name Mez share his story and thought I could relate to him. After my visit I called Mike and told him I went to church. He asked where and I told him some place called Del Ray Baptist. He told me he knew Garrett and that the guy Mez that Karen had told me about what the guy he had written his book with. I felt like God put the thermal scope on me at that point.

I came to Del Ray Baptist last April (2018) and haven’t missed a Sunday since. As I did I began to see things in a whole new light. I heard the messages about Jesus, but I also saw God’s love through Karen, Gordie, Garrett, and all of you.

But what I’ve come to learn is that if Jesus was faithful to save me, He’ll be faithful to keep me. I wasn’t looking for Him, but He came looking for me. I don’t deserve to stand here alive here today. It is by His grace and mercy alone. This is a miracle. I should be dead, but the reason I’m here is because Jesus has made me alive.

So today I come to be baptized to show that the old Greg is dead and testify that Jesus is my Lord and Savior who has made me alive. And I do this in front of you Del Ray Baptist because I love you guys and need you to help me to live this out.”

One thought on “Drugs, Death, and Deliverance – Greg’s Story of Amazing Grace”