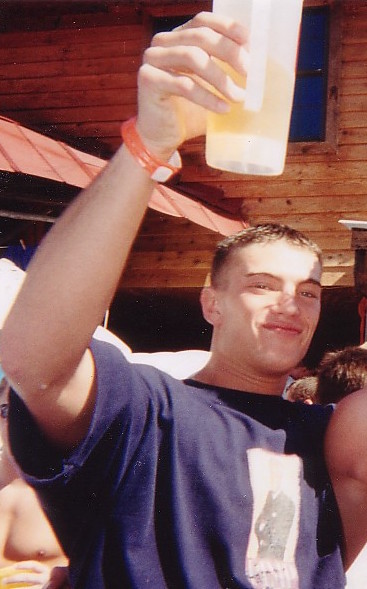 God’s pursuing love followed me to Panama City Beach where He drew a gracious line in the sand saying, “You are either for Me or against Me.”

It was early in my junior year at Virginia Tech—and I felt like everywhere I turned, God was following me around.

It all began a few months before, when a friend came to a Halloween party and talked to me about Jesus. And ever since that night, it seemed like I couldn’t escape what he had said. I believed God was real, but I was not ready to surrender my life of drugs, drinking, or dating. Yet at the same time, I couldn’t escape the sneaking suspicion that my friend was telling me the truth.

Several times that semester I found myself smoking a blunt, only to become compelled to flush it and pick up the Bible. One early morning I was reading and became so overwhelmed, I printed out portions of Revelation and nailed it to the apartment door of “the white devil” who had long been my cocaine dealer (yes, that freaked him out). On the weekends, I would party hard, but somehow attend a church on Sunday, regardless of how strung out I was from the night before.

My soul was conflicted. I loved the fleeting pleasures of sin, yet I felt as if I was being pursued by the One I later heard affectionally called “The Hound of Heaven.”

It was in the middle of all this soul searching that my buddy Adam suggested we take a trip to Panama City Beach for Spring Break. I wasn’t sure if I should, but it didn’t take much convincing for me to agree that I was just stressed out and that I needed a little fun in the sun to help clear my mind.

As we drove with windows down and music blaring, we talked about life and school and girls—and about what I had been reading in the Bible. I told Adam that I was seeing things in a new light and I was feeling like God was showing Himself to me everywhere I went. Adam was a good friend and he listened, but I’m sure he thought I was going crazy.

As we neared Panama City Beach I noticed a plane flying overhead pulling a banner behind it. As it drew closer I could make out that it read, “Jesus Loves You – John 3:16.”

I pointed my arm out the window and told Adam, “Look, God is following me around.”

Once we arrived at the hotel, we dropped our bags in the room and headed to the beach. We anchored our chairs in the sand and cracked open a pair of cold ones. After a while I noticed what looked like a small herd of students talking to people around us and handing out little booklets. A couple guys came over to where we were sitting, gave me a pamphlet and told me that “God had a wonderful plan for my life.” After we talked for a few minutes, they made their way down the beach and I turned to Adam and said, “See, I told you, God is following me around.”

We laughed it off and headed back to the room. That evening we went to a club until closing time when we made our way out to the curb to call a cab. But no sooner than we got there, three vans pulled up with holy roller graffiti on the side that read “God loves you!”, “Believe the Gospel!” and “Jesus saves!” The drivers got out, offering free rides for anyone who needed it. We declined the ride, but as we walked away I looked over and said, “Adam, I’m not making this stuff up, I think God is following me.”

The next day was a little rainy and we decided to lay low at the hotel. At some point in the night, I found some weed and smoked myself hungry. I found Adam and we made our way to the Waffle House across the street. I told Adam that I felt like God was making me feel bad for the way I was living and I didn’t know what to do. As we scarfed down our waffles he looked at me and said, “bro, I think you need to stop doing the drugs, they’re messing with your mind.”

Within minutes, the door to the Waffle House opened up and a flood of about 30 loud and laughing people carrying Bibles came into the restaurant and took seats all around us. One of the guys walked straight up to our table and said “hey, my name is Shelby, do you go to Virginia Tech?” We said yes, introduced ourselves and then he asked me, “have I ever seen you at a church in Blacksburg?” I told him I had visited a few and that it was possible.

He explained that he was with a group called Campus Crusade for Christ and that he would like to meet up with me when we got back to school to talk about God and the Bible. We exchanged information and he headed off.

After he was gone, Adam turned, stared at me in the eyes and said, “Dude, God is following you around!”

A Line In the Sand

The next day I took a walk on the beach before dusk. As I did, I saw a girl sitting by herself staring at the ocean. I wasn’t sure why but I felt like I was supposed to go over and talk to her. I said hello and asked her how she was and if she had been in the water. She kindly replied and said the water was a little too cold for her.

I said something stupid like, “yeah I’d have to have a case of beer before I got in there.” She looked at me and said, “you know, I don’t know about that, but God has taught me that Jesus is all I need to be happy.” It was a pretty serious Jesus juke, but it didn’t surprise me.  I told her that I had been thinking a lot about God and asked her to pray for me.

As I walked toward the hotel, a lady in a beach wheelchair and another guy my age signaled for me to come over to them. I knew this was another divine set up, but I felt like it would be bad to run from a woman in a wheelchair, so I made my way over to them.

The lady’s name was Stacy James and after a few get to know you questions, she looked at me and said, “Garrett, what do you know about Jesus?” I don’t remember much else that she said except that God wanted me to know that I had to choose to either be for Him or against Him because I could not be both (Matthew 12:30).

That beach trip proved to be a true line in the sand for me.

When I returned to school I began meeting with Shelby and he helped me to understand the basics of what it meant to walk with Jesus. And since that trip, I have been for Jesus. This is not because of something wise or wonderful in me, but rather, for some eternally mysterious reason, God had set His affections on me and chased me down.

I tried to run, tried to hide, tried to explain His pursuit away, but in the end, I found His grace to be irresistible.

If you are reading this and know God has been following you around too, I plead with you to stop your running. God chases you down, not to do you harm, but to rescue you.

One of God’s prophets named Isaiah once described our running this way, “we all like sheep have gone astray, each of us has turned to his own way” (Isaiah 53:6). Following our own way seems like it leads to life, but in the end it is quite the opposite. Proverbs 14:12 says “there is a way that seems right to a man, but in the end it leads to death.” Running from God leads only to judgment by God (Revelation 20:11-15).

Yet because God loves running rebels, He sent His Son Jesus to come and rescue us from our wandering toward destruction. Jesus came as the “good shepherd” who “lays down His life for the sheep” (John 10:10-11).

What that means is that Jesus came to earth to die on a cross and receive the judgment we deserve for the way we sinned against God. But then Jesus rose from the dead and now calls all people, including you, to turn from their sin and receive forgiveness from Him (Acts 2:38, 17:30-31). God follows you because He loves you. So stop your running and surrender to the One who watches over your soul (1 Peter 2:25).

Do not underestimate how important it is to always be throwing Gospel seed wherever you go. Whether we are on a beach, in a Waffle House, flying a plane, driving drunk people home, or doing normal life; remember that God is working to call His people to Himself—and He is using you to do it.

My wife regularly reminds me that “every brief encounter is from the Lord.” It may be a full Gospel conversation on a short-term mission trip or it may be simply asking a cashier how you can pray for them. God uses all sorts of “brief encounters” to awaken Gospel interest in the hearts of His elect.

The question is, are you actively seeking ways to help others hear the good news of the sinner-seeking Savior?

The year after my trip to Panama City Beach, I went back, but this time it wasn’t to party. Instead, I went with the same group whom God used to reach out to me the year before. I share that only to illustrate that God loves to use the most unlikely of people for His purposes.

So if you feel inadequate in sharing the good news about Jesus with others, do not allow that to stop you. Remember that God is the great Evangelist, He is simply allowing you to share in the joy of helping others come to know Him.