A member of our church named Julie recently shared the story of her Grandparent’s love with me and my wife so I thought I’d pass it on to you. 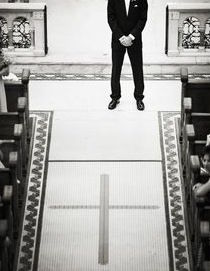 “My Grandparents truly had a lifetime love affair. Their marriage was imperfect of-course, but was marked by a consistent, devoted, and tender love for one another.

Their love remained steady in times of plenty and in times of need. In all the days and nights I spent at their house, I never heard an argument between them. And while I’m certain difficult days came and went, I never witnessed one disrespect the other.

Shortly before my Grandparent’s 54th wedding anniversary, my Grandma became gravely ill. Watching his beloved bride suffer made those days very difficult, but Grandpa stayed by her side until she safely reached her heavenly home.

As he grieved and planned for her funeral, he wanted to honor his wife one last time and fulfill his vow “until death do we part.” So on the day of her funeral, he stood at the altar one last time. As the doors opened and the pallbearers brought his bride down the aisle, he waited for her in the same spot he stood 54 years earlier when she walked down to become his bride.

That day he fulfilled his vow and committed her into the hand of the One who had given her to him. He was faithful, all the way to the end.”

“Husbands, love your wives as Christ loved the church…” Ephesians 5:25