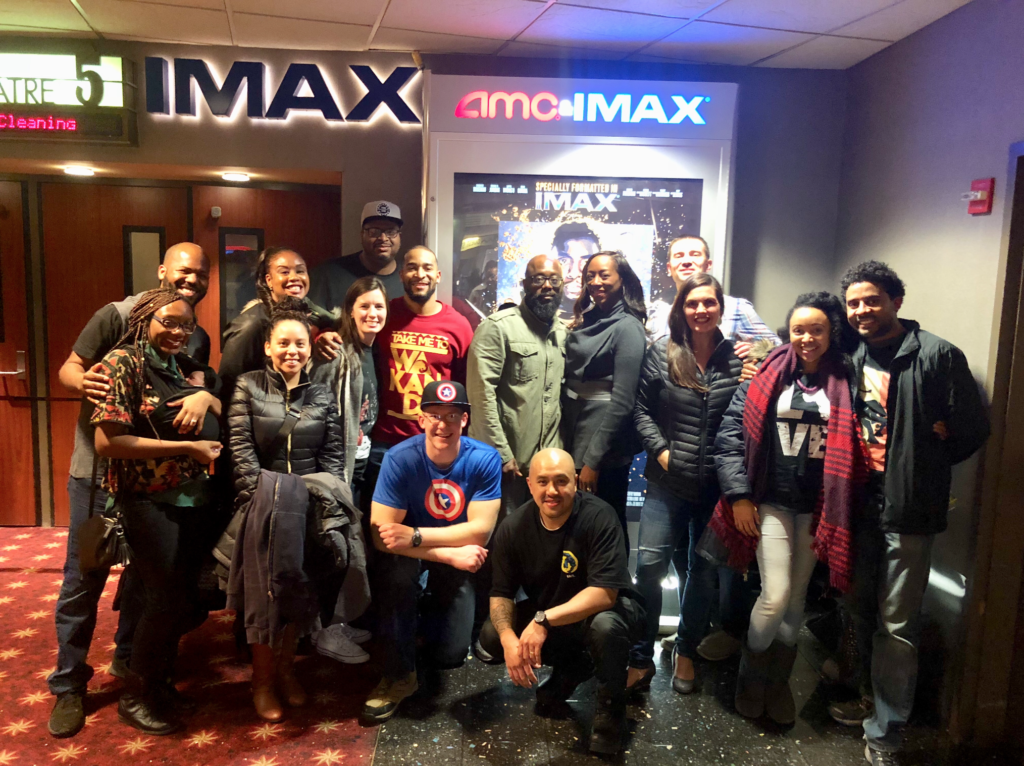 To be honest, I can’t remember going to a movie quite like Black Panther. The buzz among many of my friends has been feverish. Some are Marvel movie lovers, but for most of them, Black Panther was about something much more.

Normally, if I were writing a review I’d hit on the movie’s theological themes[1] or what kind of workout those fellas did to get so rocked-up, but instead I’m going to take a risk and share about how the movie affected me personally.

Black Panther is a movie about a superhero, but not just any superhero—a black superhero. And that’s what has me a bit perplexed. The movie was excellent, but it moved me emotionally in a way I wasn’t expecting. The plot line was inspiring, the acting was captivating, and the special effects were dope. But that’s not what got me.

I should probably tell you this upfront—I’m a recovering racist.

I never had a disdain for black people, or knowingly treated any black person with contempt. But sadly I’ve come to see that I had racist attitudes that assumed things about people who didn’t look like me. I passively assisted in the perpetuation of stereotypes that were demeaning to people whose culture and skin color were different than my own.

My parents didn’t raise me that way, but it was in the air I breathed. It was in the shows I watched, the attitude of my almost exclusively white hometown, churches I attended, and in the hearts of extended family members.

But over the past eight years, God has changed me in ways I never saw coming. You can read more about that here. Black Panther was no epiphany for me, but it captured themes I’ve been learning about in a way that was deeply moving.

We live in a world that has wrongly dishonored black people in horrific ways. Slavery, discrimination, injustice, and racism have beaten down the image of black people in the minds of many generations. Black men have long been portrayed as uneducated hoodlums who cause trouble while black women are seen as dramatic temptresses with little moral character.

Yet, in this movie black men and women were set forth with dignified beauty. They were not dominated by another narrative, but they had their own. Sure, it was a Marvel fantasy movie, but there was something powerful happening when the nearly all black cast filled the screen. Their dignity was represented boldly, and beautifully.

As a Christian, I know that God has created each of us uniquely to reflect His image. Our diversity of culture and skin color is part of His glorious design. Though this movie had nothing directly to do with God or the work of Christ, the dignity of black men and women shined through in a way that was empowering.

A movie has no power to ultimately change people’s hearts. Only Jesus can do that. But I believe it can serve to help the progress we must make toward racial unity. It can encourage the black community and educate other communities. I know it did that for me.

I won’t give any spoilers here, but Erik Killmonger’s role[2] was brilliant. His character’s bitter rage was provoked by the abandonment and betrayal of those who were supposed to love him. His disdain for the system that hurt him and desire to enact change at all costs only compounded his pain, but left me sympathizing with his character.

I know it was just a movie, but his hurt echoed the stories of so many of the black friends I love. Too many have known what it is like to be abandoned and left to fend for themselves. Too many have grown up in a world that has wounded them because of the color of their skin. Too many harbor the hurt his character embodied.

As I watched Killmonger become consumed by his quest for liberation, I was freshly reminded of the pain so many friends have shared with me. Watching him fight to make his brokenness whole freshly reminded me of my responsibility in the quest for progress. His pain reflected the pain many of my people have inflicted in days past and present. It gave me a fresh desire to serve in whatever way I can to undo what so many before me have done.

Vengeful anger will not bring progress, but I do believe God can use the pain of a people long oppressed to shine brightly as an example of how to make progress. I believe the grace of God can bring healing to wounds both in the culture and in the church. I pray the church will learn to better model this in a way God surely desires.

There is something beautiful about the unity of spirit that black brothers and sisters share. Seeing people decked out in traditional African garb and King Jaffe costumes gave expression to something I’ve never experienced. I’ve been part of tight knit teams and churches with thick unity, but black culture, in all its unique forms, has a unique unity that I find captivating.

There’s an energy and freedom (and volume) that I’ve grown to love. The common bond that centuries of struggle, suffering, and oppression tried to sever has only solidified them. As a people they have weathered much together, despite their abiding challenges.

I’m far from an expert on black culture, and don’t assume all black people experience black culture the same, but in this film and in the lobby outside I shared in something I often don’t. I was a minority on this night. My skin color was mildly represented in the film and I felt “other” in a way that was unusual.

Yet in the midst of that, I felt welcomed. The movie’s story and my friends’ laughter ushered me into a world that was foreign to me. It’s not the only time I’ve been in this situation, but it was a fresh joy for which I’m thankful and hopeful for more.

As a Christian, I’ve learned to see every situation, every movie, and every interaction through the lens of Jesus’ love for me. Tonight I freshly saw His love and felt an unexpected appreciation for our church family. We are a people continually deepening in all sorts of diversity. Being part of the Black Panther party gave a fresh way to experience the love we’ve been growing in over recent years.

Finally, there was something charming about Wakanda. One of my friends said, it “felt like a world where a piece of Africa escaped the destruction of colonization. It was fun to dream about.” Seeing responses like this helped me, maybe for the first time, understand why so many feel homesick for Africa.

What would their lives have been like, had my ancestors not kidnapped them and dragged them to America? Sadly, one can only wonder.

Homesickness for Africa made sense to me in a way I could strangely identify with. As a Christian, I too long for my homeland. Long ago Adam and Eve traded the paradise of God for slavery to sin. Their sin has led to much suffering and heartache. This is where the great hope of a new world rises up in the hearts of all humans, whether black or white. Wakanda was not heaven, but it helped me to long for it in a fresh way.

I’m thankful to my friends who have patiently taught me about their struggle and for this movie that moved me in a way I wasn’t expecting.

[1] Some of the key theological themes include the emptiness of ancestral worship, the devastating effects of sin, the temptation of the oppressed to become the oppressor, the beautiful complementarianism portrayed in the film, and the resurrection of the king to overthrow the evil strongman.

[2] Played by Michael B. Jordan…can you say Oscar?

23 thoughts on “A White Guy’s Reflections on Black Panther”