I recently tweeted a critique of Steven Furtick’s promo video for his current sermon series Gates of Change. Here’s what I said: 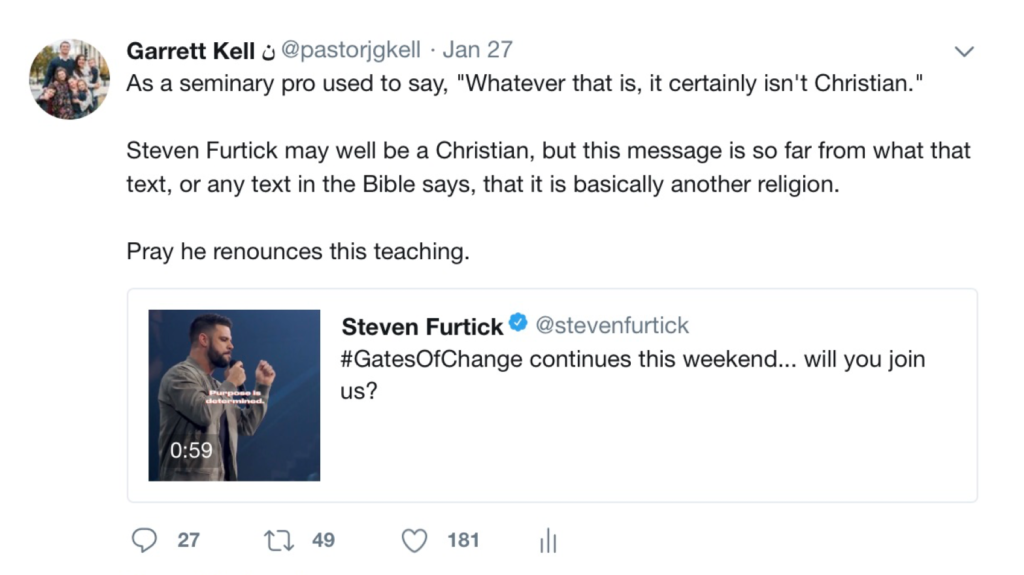 Someone asked me if I’d listened to the whole sermon for context. I explained that I’ve listened to enough of his sermons to feel justified in the critique. They challenged me to reconsider, so I decided to watch the entire “Pillow and the Promise” sermon with my wife.

I rarely do this kind of evaluation, but since I publicly critiqued his 30 second promo, I think it is worth sharing my thoughts on the entire sermon.

I plan to offer both encouragement and criticism of his sermon. This is similar to the weekly feedback I receive when our staff and interns meet every Tuesday to pray, plan, and reflect on the previous Sunday’s service and sermon. Each time, I’m helped towards growth as brothers and sisters give positive and challenging feedback to my sermon. I’ll treat this reflection as we’d handle our Tuesday review.

His speaking gifts are evident and it makes sense that he’d draw a sizeable crowd. His rugged style attracts people who are fed up with traditional church. This could be a useful tool if submitted to the Lord.

I would have a challenging time sitting under his teaching for several reasons, one of which is the lack of humility I sense from him. This is subjective, but he seems to be very aware of himself when he preaches which is distracting for people who desire to see God.

His theatrics will either be endearing or off-putting, depending on your preference. I’ll let you make your own call on that, but he certainly wins the “Most Time a Pastor Spends Preaching While Laying Down” award. I didn’t clock it, but he must have preached at least ¼ of his sermon horizontally. 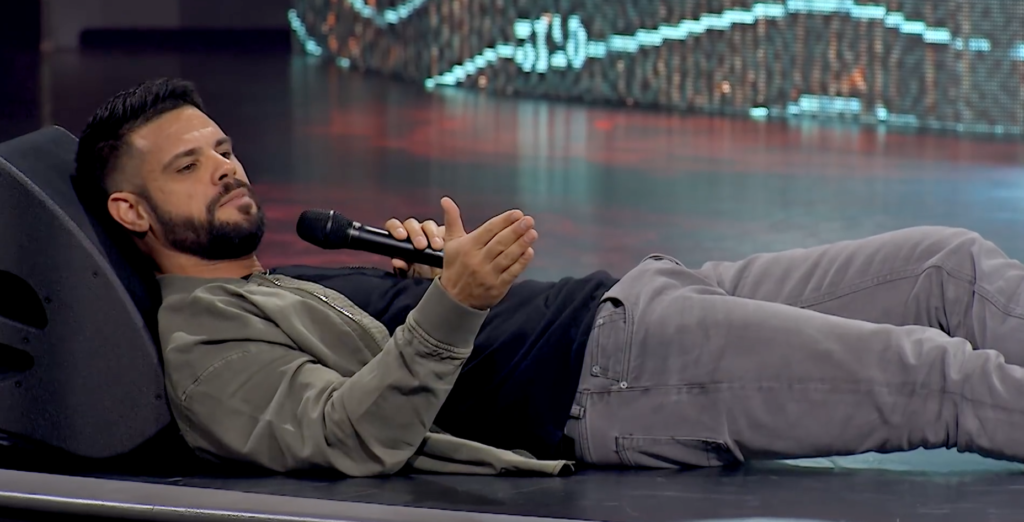 Finally, I’m in total agreement with him that throw pillows are a useless invention. My wife and I have at least a dozen on our bed and I have no idea why. 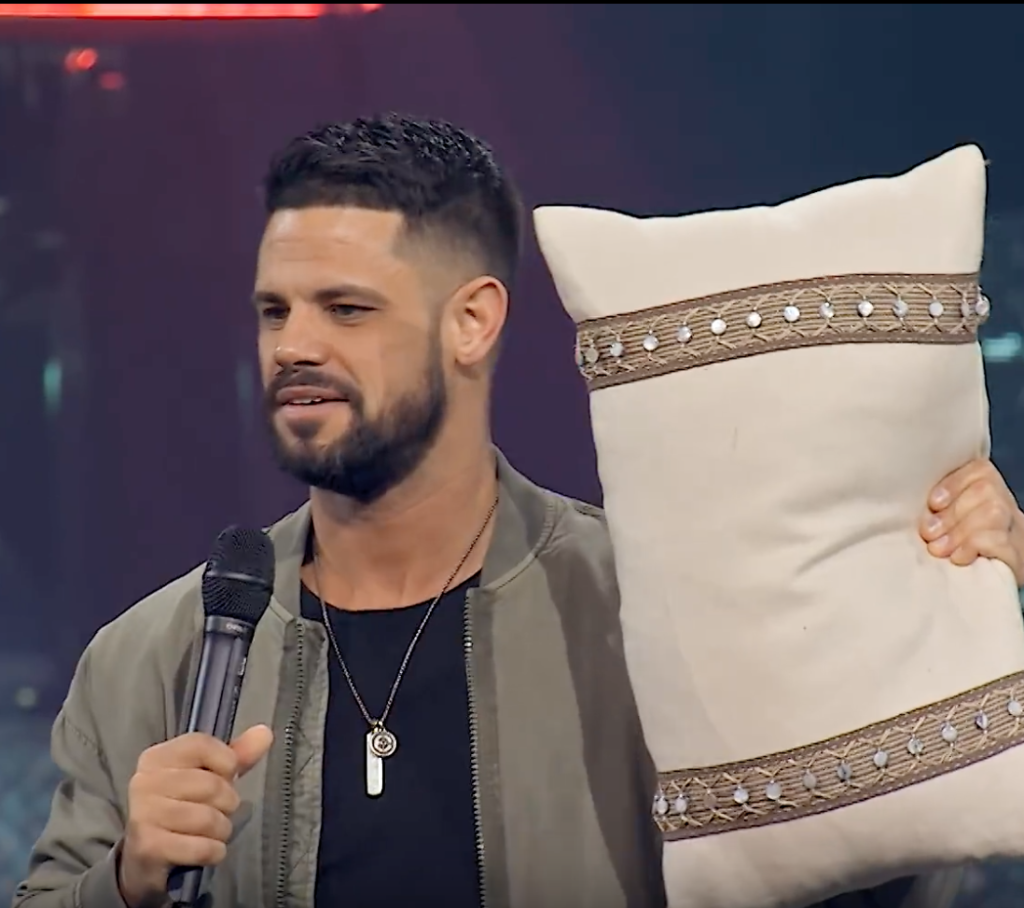 Steven’s point that God’s purposes are determined and that our mistakes can never thwart His purposes was encouraging. This is a wonderful truth. We have a sovereign God who works in the mist of all our messes.

He taught that God has determined purposes that He is always working out in our lives. Every situation and circumstance serves as an opportunity to see Him as active in teaching us something. This overarching theme was faithful and should serve us to remain attentive at all times to God’s work.

Considerations—Areas of Concern or Disagreement

He preached from the Bible, even giving some faithful historical context at times. But the point of the passage was not the point of his sermon. Not every sermon must be expositional, but a preacher’s job is to say what God has said in a way that is clear, compelling, applicable, and honoring to His intent.

Steven captured elements of the text well, but missed the main point. His main point seemed to be something like: If we claim the promise that God has a determined purpose in every situation, it opens gateways for us to see God working in our lives. This is not only very me-centric, but just not what the text is about. If you care to, you can hear how I preached the same text a couple years ago.

This sermon was not even slightly affected by the death and resurrection of Christ. Jesus was mentioned, but if a non-Christian were to listen to this message, they would have no idea that they are as sinner, who Jesus is, what He did for sinners, or how they could be forgiven and reconciled to God. They would simply think they need to get in tune with God, whoever that God may be. I think a Muslim or Jewish person could have said “amen” to most of the sermon.

For the Christian, there was no instruction of how to depend upon the grace of God in their failures and struggles with sin. Instead, the believer was charged to be alert and declare situations as being places God is working for their benefit. This too is true, but what happens when we do this poorly? What strength do we do this in? This Gospel-lessness seems to characterize most of the sermons I’ve heard from him.

There was much talk about resting in God’s promises, but no talk about where to get them. We were not directed to the Scriptures as God’s all-sufficient source of promises. Yes, he grabbed his bible and used it as a pillow, and yes he quoted a few verses, but he was unclear on where we get promises from God. 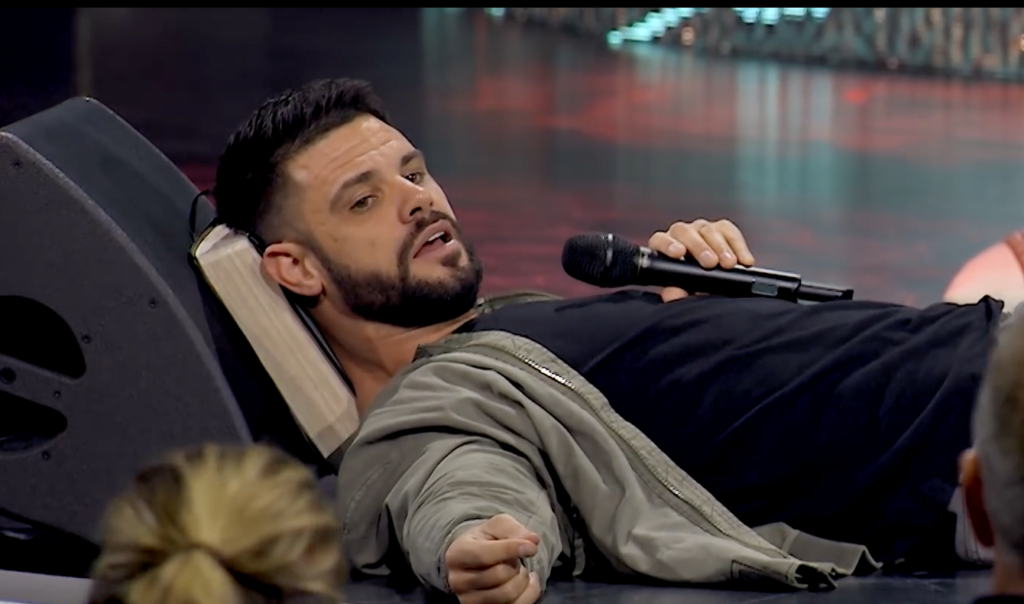 This is important because Steven presented a mystical approach to hearing from God. If I didn’t know better, I would have assumed that God speaks promises to us in all sorts of different ways. Steven never cautioned his hearers about the danger of Satan’s deception and counterfeiting tactics. I know you can’t say everything in every sermon, but his handling of this seemed careless at best.

I’ll say this sermon had less word of faith theology than some of his other sermons, but you can still hear it come through. At 22:55 he starts the nonsense we saw in the promo video about us having the ability to declare things to be what we want them to be. You can hear more of it at 25:09 and 28:50 among other places.

Now, to be fair, I completely agree that God is always acting and that we need to wake up to it. But his language is very word of faith-like and explains life in a me-centric way. God seems to be on the outside of the situation either crossing His fingers hoping we’ll realize things or being at our beckon call to act when we declare something.

The problem is that Steven is not teaching the church to submit themselves to God’s purposes in their trials, but rather to speak purpose into their situations. There is a great difference. In one theology God is big and glorious and we are to trust Him. In the other we are the determiners of destiny and speak things into existence. In some ways he’s speaking out of both sides of his mouth, but his teaching is confusing at best and downright errant at worst.

After watching the whole sermon, I stand by my statement. This sermon was something, but it was not Christian. It was an amalgamation of Christian ideas mixed in with word of faith prosperity Gospel.

I am not in any way saying he is not a Christian. But in my opinion, Steven Furtick is on a dangerous trajectory. He desires to be edgy which is always dangerous because eventually most edgy pastors fall off the cliff.

My hope for Steven is that he will spend time considering the gifts that God has given him and use them to make much of God. He is young, famous, and flourishing, which are all great dangers for pastors.

Pray for him to be humbled and see himself primarily as a servant of the text. Pray also for him to develop good friendships with faithful mentors if he does not already have them. If he does, pray they would have courage to speak truth to him about his dangerous trajectory. Pray also that he would be humble enough to receive them.

And may we all be ever cautious of our own propensities toward error. Lord help us.