In recent days, ISIS militants led twenty-one Coptic Christians onto a secluded beach in Libya. With faces covered, they forced the Christians to their knees, in preparation for their execution. Standing with his knife drawn, one militant mockingly said to a praying prisoner, “Safety…is something you can only wish for.” 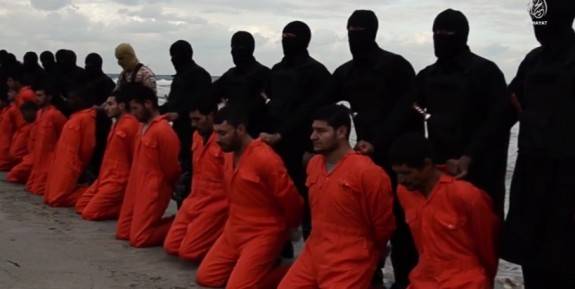 They proceeded to cut off all their heads with knives.

Oh, if only that masked man knew how safe that beheaded brother is now. If he did, he would have joyfully thrown down his knife, taken off his mask, and surrendered his life along side those heroes of the faith.

God’s word assures us that those twenty-one Coptic Christians have nothing to fear any longer. Militants may have killed their bodies, but their soul will never die (Matthew 10:28). Their faith has been made sight and they join the many other believers who have laid down their lives in similar ways.

Revelation 6:9–11 “When he opened the fifth seal, I saw under the altar the souls of those who had been slain for the word of God and for the witness they had borne. 10They cried out with a loud voice, “O Sovereign Lord, holy and true, how long before you will judge and avenge our blood on those who dwell on the earth?” 11Then they were each given a white robe and told to rest a little longer, until the number of their fellow servants and their brothers should be complete, who were to be killed as they themselves had been.”

Those brave brothers have been given a robe and told to rest a little while longer. There is more time until their blood will be avenged. More Christians will be called to shed their blood for the testimony of Jesus. More believers will join those martyred saints.

But there is a day coming when the blood that is shed will no longer be Christian blood. It will be the blood of all those who will not repent of their sins. That includes ISIS militants. ISIS soldiers may raise their swords and shed the blood of Christians today, but a day is fast approaching when Jesus will unsheath His own sword to avenge the blood of His people.

Revelation 19:11–16 “Then I saw heaven opened, and behold, a white horse! The one sitting on it is called Faithful and True, and in righteousness he judges and makes war. 12His eyes are like a flame of fire, and on his head are many diadems, and he has a name written that no one knows but himself. 13He is clothed in a robe dipped in blood, and the name by which he is called is The Word of God. 14And the armies of heaven, arrayed in fine linen, white and pure, were following him on white horses. 15From his mouth comes a sharp sword with which to strike down the nations, and he will rule them with a rod of iron. He will tread the winepress of the fury of the wrath of God the Almighty. 16On his robe and on his thigh he has a name written, King of kings and Lord of lords.”

One day soon, Jesus will return, not as a lamb, but as a lion (Genesis 49:8; Matthew 24:30). His robe will be stained with the blood of His enemies (Isaiah 63:2-3), including the men who slit the throats of those twenty-one Christians. The day of God’s vengeance is coming soon.

The only hope those murderers have of escaping the Day of Justice is to repent of their evil and look to Jesus who willingly laid down His life in a way much like those twenty-one men on that beach.

But what Jesus did on the cross was far greater. Jesus was the sinless Son of God who came for the purpose of saving sinners like them, like us. The Apostle Paul, once a persecutor of Christians said it this way “Christ Jesus came into the world to save sinners, of whom I am the foremost. But I received mercy for this reason, that in me, as the foremost, Jesus Christ might display his perfect patience as an example to those who were to believe in him for eternal life” (1 Timothy 1:15-16).

When Jesus stopped Saul in his tracks on the road to Damascus, He said “Saul, Saul why are you persecuting Me? (Acts 9:4). He would say the same thing to ISIS militants today.

The video that recorded their murder of our brothers was titled “A Message Signed in Blood to the Nation of the Cross.” Well, Jesus has a message to ISIS signed with His own blood. It is this, “repent of your disbelief in Me and repent of your murdering My people and you will live, but if you continue to deny Me, you will pay with your own blood.”

Today is a day of grace, but the sands of time are sinking from the hour glass of God’s mercy. The Day of Judgment is coming. For those of us who are in Christ, we long to see mercy extended, but we also long to see justice served. We are tired of burying our brothers and sisters in Christ.

So what ought we do as we wait Jesus’ return? We must pray.

Brothers and sisters, there is much to consider at a time like this. May God give us sobriety about what it means to be a Christian and certainty that the joy set before us is worth despising the shame—no matter what the cost.

4 thoughts on “Jesus’ Message to ISIS Signed in Blood”