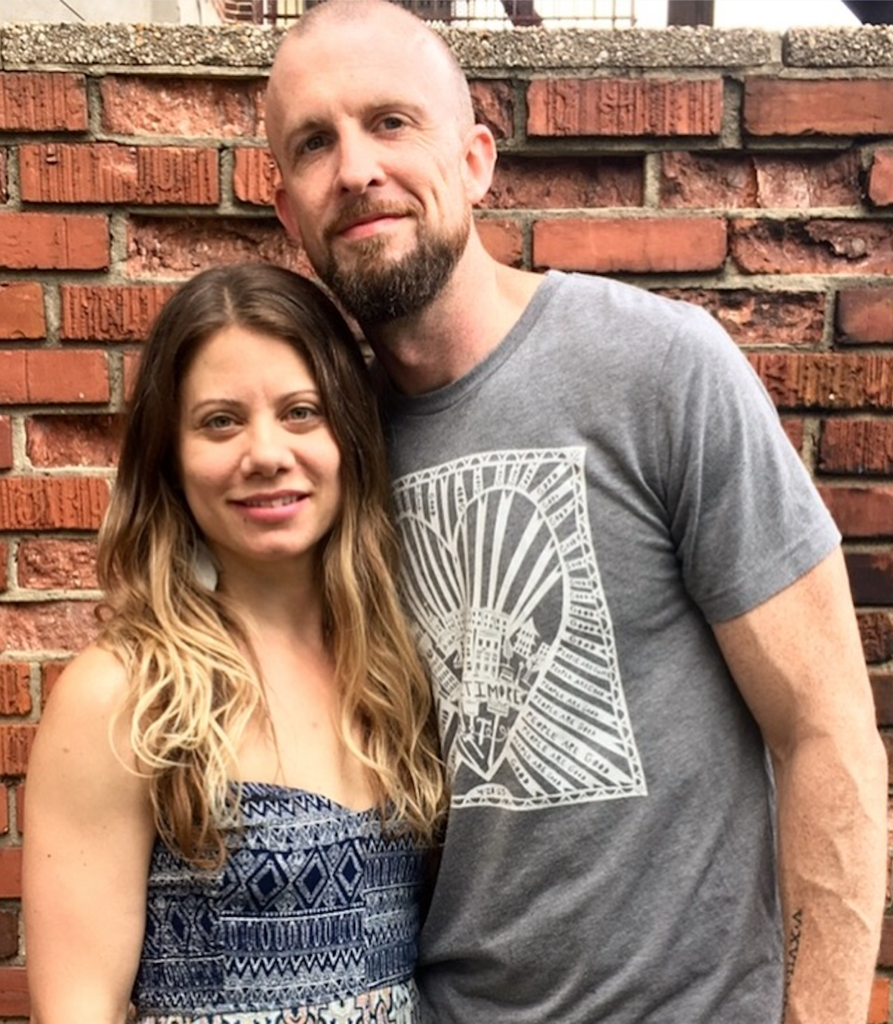 On June 2, 2019, Pastor Joel Kurz baptized his wife, Jess at The Garden Church in Baltimore, MD. After years of reflection and struggle, Jess came to understand that her conversion happened after her husband began church planting work. The story she shared at her baptism is one of rebellion and the grace of the Gospel. Praise God for His mercy!

I was not raised in a godly home. Church attendance was not something we did. At 12 years old, however, my family went to church for Easter. I thought that day was all about a bunny and the thrill of finding hidden eggs. But after that Easter Sunday, I remember my mom asking my sister and I if we liked our time at church and if we wanted to keep going. We both said, “yes.”

That summer I attended a Christian camp. I remember hearing how Christ died on the cross for sinners and I remember being told that if I prayed this “prayer”, that I would go to heaven, and not hell when I died. So, of course, I prayed the “prayer”.

There was no Godly conviction when I sinned, and I still delighted in sin. I feared that I did the prayer-thing wrong. This must mean that I needed to pray the sinner’s prayer again. I was dunked at 14 because I was told I should be baptized.

For years, my life spiraled into a pattern of sin, followed by the horror: “I’m going to hell now”, then praying all over again, and even still feeling hopeless. This pattern went on for many years––in one form or another. Though I never expressed it, I severely doubted God’s love for me and did not love him and other people. Believing I was a Christian, I graduated college, married a young man going into the ministry, had babies, and, in July of 2008, even moved with my husband when he wanted to start a church in Baltimore.

Our transition to this city was exciting, at first. The excitement, however, wore off with the challenges of being married to a church planter. I was thrust into a world of expectation to be a pastor’s wife and felt lots of pressure to get way out of my comfort zone, live on mission, go to the park and try to meet with some moms, and share the Gospel with some random individual Joel was trying to connect me with. These things are just small examples of how it all became so utterly frustrating and daunting as I had no clue what to say to these women.

How do you even admit these feelings to your pastor-husband who has this immense desire to start this church in Baltimore?

You can’t fake it––but I couldn’t admit this to Joel. I went back to one of my most favorite sins of all time: escapism. The year was 2009, and it’s also when I started telling myself lies. I said to myself, “Joel loves this church and others more than he loves me.” I said, “He wouldn’t care in the least if he wasn’t married to me.” I said, “He hates me and I suck at this pastor’s wife thing.”

The stress was too much. I started getting drunk to numb the pain. I would drink so much and stay out so late, I don’t know how I made it home in one piece. I finally came up with a plan to do whatever I could to make Joel as miserable as possible––then he would finally tell me to leave. I followed through with my plan, but I couldn’t get him to tell me to leave. I gave myself over to severe sins and didn’t admit everything to him right away, but I told him that I wanted out. I honestly hated my husband. I hated this church.

It was July of 2010 when I told him I wanted to leave. He begged me to go on a marriage retreat, and do marriage counseling with him. I reluctantly agreed. He knew he couldn’t continue to serve as a pastor and said that he would try to find a church planting replacement for him. With all that I had done, and all I was still doing that he didn’t know about: I knew that I was not converted. I knew I wasn’t a Christian. I remember asking Joel one day if he would be ok if I wasn’t a Christian. He told me he would still love me, but that he wouldn’t be “okay” with it. He said, “If that’s the case, I would preach the Gospel to you every day if I have to.” And he did.

For a solid six months, he patiently preached the Gospel to me while trying to work himself out of a job. He assured me that God forgives all sin through Christ and that anyone who turns to him finds the hope of forgiveness. For six months, I refused to believe and refused to find any hope in faith or our marriage.

In January of 2011, something changed. I now believe that what changed is this: I was converted. The Holy Spirit of God convicted me of my sins, assured me that Christ took the penalty for my sin on the cross, and rose again from the dead. I repented of my sin and trusted in Jesus Christ.

It happened in a moment but I can’t tell you exactly when that moment was. All I know is that Joel took me out to a restaurant and I confessed my sins to him. As I confessed sin to him, I confessed those sins to God and was assured of his forgiveness. I not only felt grace and love from Joel, I felt grace and love from God. I felt a weight lifted off of me. I felt as if I had literally hit rock bottom and God broke through my wicked and dark heart––and He saved me.

I was saved under the faithful preaching of my husband. The hopelessness that I had always felt was gone. I grew with an insatiable desire to be in the Word and even better: The Bible made sense to me. I had a new desire to pour into other people, share the Gospel with others, and serve the church. These were just some of the beautiful evidences from the Spirit that God had saved me.

For years, I wrestled with my own story––in large part was the astonishment: was I really not converted during those early years? But it is what it is. It’s my story and I praise God He saved a wretch like me. It took me some time to realize that I was converted in 2011, which is why I am just now being baptized. But I want to be baptized today because I believe I was not a Christian when I got dunked at 14 years old. And I want to obey Jesus.

I know without a doubt that God has saved me. The thought: God chose to save a miserable wretch like myself––this is amazing grace.