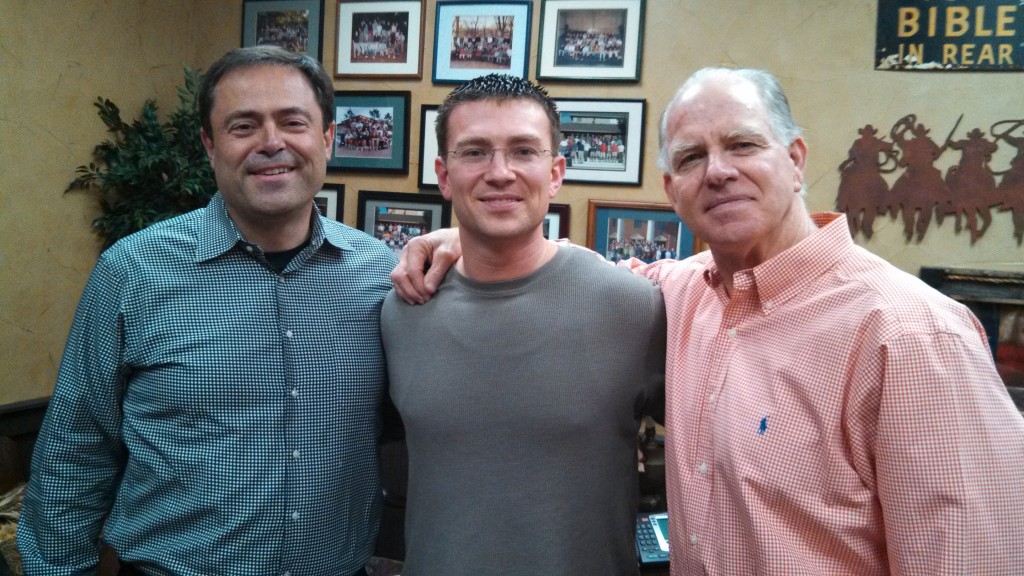 One of my earliest prayers as a Christian was, “Lord, bring me someone to teach me Your Word.”

My life before Christ had been devastated by the lies of sin and I needed someone to help me learn what it meant to walk in the truth of God’s Word. God graciously answered my prayer by bringing many people into my life, but two of the most influential have been Tommy Nelson and Mark Dever. I was recently blessed with the opportunity to see these men come together for an evening, which gave me a good reason to reflect on how they have marked my life—which I hope in turn will mark yours as well.

On the one hand, these men have little in common. Tom Nelson is a former D-1 football player, who in his 60s can still bench 300, squat 300, and run 3 miles. Mark, well, he isn’t sure what football is and doesn’t understand why you’d run if you can sit. Tom is more of an introvert while Mark is so extroverted he makes the rest of us look like monks. For fun Tom shoots things and goes to they gym while Mark plays board games and organizes Puritan quotes. Tom jokes he had a 2.1 GPA as a physical education major (though he’s really quite brilliant), while Dever has more degrees than Fahrenheit.

On the other hand, these men have much in common. They both love God in ways that are contagious. They both tremble at His Word and help others do the same. Both men have godly wives who joyfully and sacrificially support them in their ministries. Both Tom and Mark have resisted climbing the ministry ladder so they can pour their lives into the congregations they love. Both men work tirelessly to impart the Word of truth to the next generation. They both possess a courage that can only be explained by the promised power of the Holy Spirit (Acts 1:8). Both men have a unique ability to stir people’s hearts with awe and love for God.

While there are plenty of stories I could share on these men, I’ll give you one that characterizes what I love most about them.

A Breakfast with Tom the Bible man…

I’d been a believer for about a year when my friend Jason Seville and I stopped in Denton, Texas to have breakfast with Tom Nelson. I was told Tom had a discipleship program called Young Guns where he taught verse-by-verse through the Bible for a select crew of men. I wanted to do this program, but needed to size up this unknown pastor first.

During breakfast I pulled out a list of 20 of the hardest questions Jason and I could put together. We were sure our inquisition would lead him to beg for mercy, but we were wrong. As I asked questions, Tom gave answers. But in his answers he never said, ‘I think’ or ‘I feel.’ Rather, he’d say, ‘The Bible says…’ and then rattle off several verses from memory to explain what we thought were unsolvable mysteries. He did this for each of our questions—quoting Scripture and giving brief biblical commentary. I’d never seen someone handle God’s Word like that before—and my heart burned to be able to do the same thing.

Over the next three years Tom allowed me into his life to learn from him. I went through his discipleship program three times, accompanied him to many of his other bible studies, and became his yard-care gofer so I could ask him questions about supralapsarianism in between water breaks. I was hungry for God’s Word, and the Lord fed me well through Tom.

Tom had a masterful way of teaching so that God’s Word stuck in my head. He was gritty, hilarious, a master illustrator, and could teach in a way that made Levitical codes and land allotments come to life. He helped me see the big picture of the Bible and how every part pointed to Christ. When Tom taught, I wanted to go home and study my Bible more.

I truly believe God brought Tom into my life at the perfect time. I was young, prideful, and impressionable which was a recipe for disaster if I had gotten in with the wrong theological crew. But, in the Lord’s kindness he introduced me to a man who taught me to trust the Bible and even more, the God of the Bible. I owe much of my esteem for God and His Word to the Holy Spirit’s work through Tom Nelson.

After my time studying under Tom I helped to plant a church in Graham, Texas where I pastored for 7 ½ years. During those years God blessed the preaching of His word, but it was certainly in spite of me. I felt well trained to handle the Scriptures, but didn’t have a clue what to do with His church. That’s when I met Mark Dever.

A Weekend with Mark the Shepherd…

I met Mark briefly at a Desiring God conference and then spent more time with him at a 9Marks event at Southwestern Seminary. Mark shared his email address with me and I suspected I’d never see him again.

A few months later I was struggling with a pastoral situation and emailed Mark a question. He wrote back saying, “Why don’t you come to DC for a weekend since I’m better in person than on phone or email.” The invite seemed over the top, but my wife and elders gave the green light so I made the trip to Capitol Hill Baptist (CHBC) in Washington, D.C.

Mark picked me up from the airport and began asking me what would prove to be the first of a thousand questions. He wanted to know everything about me, my marriage, and our church. I’ve since learned that Mark asks questions because he really loves people and desires to help them in order to strengthen God’s kingdom. As I followed Mark around for the next several days I was a bit beside myself. Mark was a pastor—a real pastor.

He loved his church. He showed me how he prayed through the church directory each day to keep the members close to his heart and fresh on his mind. He let me sit in on an elder meeting where, if I hadn’t known it, I never would have guessed he was the senior pastor because of the way he quietly gave room for the other men to lead and wrestle with decisions.

On Sunday he introduced me to members of the church and seemed to know what was going on in most of their lives. He prayed for other local churches in the service and even encouraged people to consider visiting them if CHBC wasn’t right for them. His preaching wasn’t flashy, but you could tell that with every idea he was pushing the people toward heaven. His applications encouraged people to talk over the sermon during lunch and to share the Gospel with unbelieving friends.

Long story short, after two years I came to CHBC where I served as an intern and elder before being placed across the river at Del Ray Baptist Church, where I now serve.

I’ve learned from Mark that life isn’t about us, but about building God’s kingdom. Mark seeks no glory for himself, only to help do spiritual good to those he encounters. His love for the church abroad is seen most clearly in his love for his church at home. He regularly chokes up talking about them because of his pastoral love for them.

There are countless lessons I’ve learned from these men, but the main one is this: God works through discipleship relationships to change lives.

By inviting me into their lives, these men have said, “Imitate me as I imitate Christ” (1 Cor. 11:1). In countless ways they have said, “Come and see Jesus” (John 1:46, 4:29).  And by allowing me to follow them, they have allowed me to see who they are, warts and all. There are things I want to emulate from both these men, and there are things I want to avoid. I don’t agree with all their convictions, but I will never be the same because of the way they have loved and led me toward the Savior.

One of the simplest ways this is true is that God has given me an inescapable passion to always be discipling other young men. I may not have the Bible memorized like Tom or memorize everyone’s name like Mark, but you don’t have to do those things to help others love Jesus. Our call is to “make disciples” (Matthew 28:18-20), “be witnesses” (Acts 1:8), and take truth given to us and “entrust to faithful men who will be able to teach others also” (2 Timothy 2:2). Any of us can do this, and all of us must do it. This is the call of our Savior.

So pray that God might use you. Pray He might give you someone at your church to pour into. If you aren’t sure how to do that, pray He might give you someone to help you as well. Don’t wait till you’ve arrived to get started, cause we’ll never feel “ready” to help others. It is, however, out of this weakness that Jesus gives strength (2 Cor. 12:9). And if you’ve had someone pour into you, tell them how they’ve blessed you. That’s a good way to help those who have helped you.

My life was indelibly marked by two men who simply offered a breakfast and an open door. They radically transformed my life by giving me truth and time, and I want to invest my life doing likewise. This is the model of Christ; this is the New Testament call for those who follow Christ. Extend an invitation to a younger Christian and get started.

9 thoughts on “Two Men Who Marked My Life”