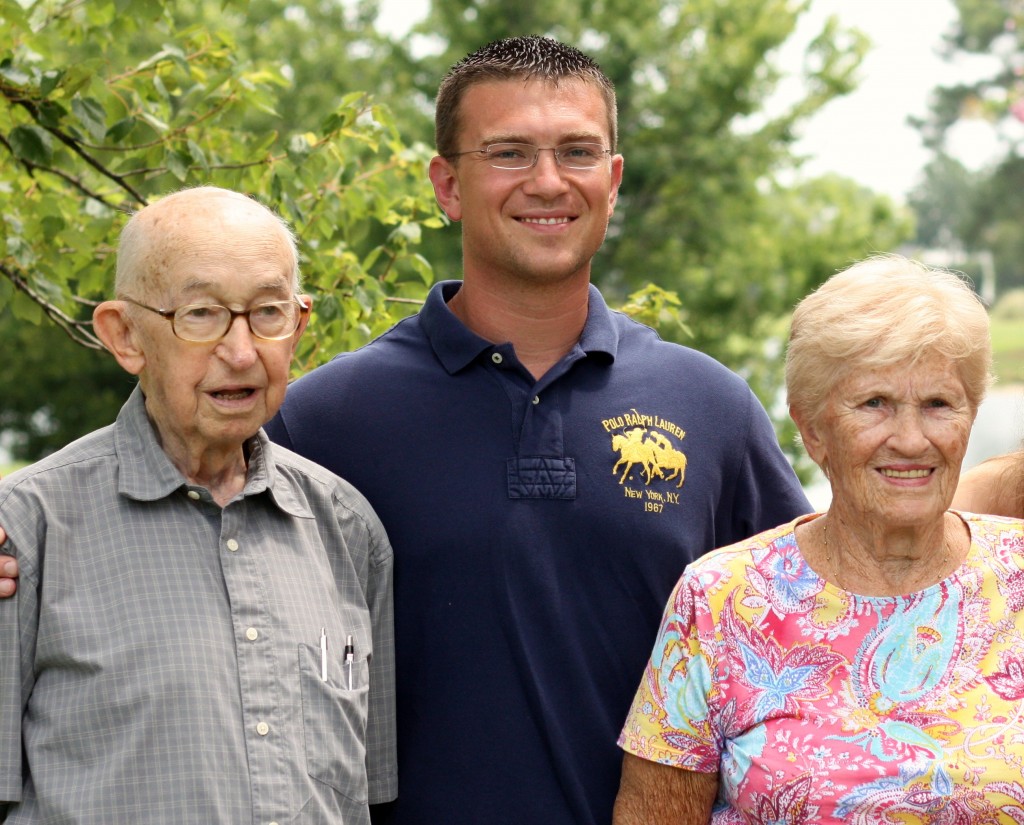 We weren’t sure when Grandpa woke up, but we knew it was long before the sun did. My earliest memories of him revolve around a small kitchen table where he sat each morning drinking coffee and reading the newspaper. The walls of his basement were decorated with World War II honors and pictures of his hunting victories. Locked gun cases held treasures we were only allowed to behold when Grandpa opened them for us.

I learned my first curse words from my grandfather, who was sure to drop some colorful language in at least every other sentence. He could be an intimidating man, but his smile and belly laugh calmed our trepidation. His love for my grandmother was marked by service and tenderness I’ve rarely seen rivaled. He stood when she came into the room and attended to her every need.

Granddad was an occasional churchman. His faith would have best been described as private. As our family’s patriarch he always prayed before meals, when  he’d take the opportunity to thank God for our country and blast whomever might be president at the time. I never saw him open a Bible and never heard him speak of Jesus, except when interjecting his name as an expletive.

In 2011, my wife and I planned a trip to Wilmington, North Carolina, as part of our family’s summer vacation. We chose this spot because we love the beach, but mostly because my grandparents lived there, and we wanted them to meet our newborn son. Our family was buzzing as the days drew closer, but along with the anticipation, a weighty awareness rested on my heart. The Lord was calling me to share the gospel with Granddad.

Though burdened for his salvation for years, I hadn’t enjoyed many in-person opportunities for that kind of conversation. Granddad was now in his 80s and, though not in bad health, I sensed the Lord had set apart this time for me to initiate an eternally important conversation with him.

I guess I’m like anybody else when it comes to sharing the gospel. I believe the good news with all my heart, but whether it be fear of man or feelings of inadequacy, I still get anxious whenever I proclaim Christ’s name. The pending conversation with Granddad took my fear to another level, for several reasons.

First, it was Grandpa. He was a man of steel, and I was scared to death to speak truth to someone who’d lived nearly four times as long as I had. He’d forgotten more than I’ll ever learn, and the thought of calling him to repent and believe in King Jesus made me so anxious I was nearly nauseous over it.

Second, he claimed to be a Christian. He’d gone to church a billion times and heard as many sermons. He was a longstanding member of a Presbyterian church that appeared to be, to put it charitably, light on the gospel. Though Grandpa was a man of impeccable integrity and faithfulness, he didn’t display fruit that would be characterized as Christlike (Matt. 7:16; Gal. 5:22-23).

Third, he was family. It’s always tough to share the gospel with family since they know all about you—the good, bad, and the real bad. Grandpa knew me when I was a womanizing cokehead who mocked religion and disgraced my family. Though Jesus has done a wonderful work in my life, I was still aware that Grandpa knew my past. And on this particular occasion, it haunted me.

Before the trip, I prayed and asked others to do the same with the hope God would soften his heart and give me courage to speak truth. The Lord answered those prayers as on the last day of the trip I had a clear 30-minute gospel conversation with him. At first it was a little tough, but I believe the Lord blessed our time together.

Though Grandpa raised numerous questions and shared some of his doubts, he expressed willingness to consider the news I’d relayed to him. Once I returned I sent him a letter addressing his questions, some selected Scriptures to consider, and a copy of my friend Mike McKinley’s excellent book Am I Really a Christian?. We had one follow-up conversation, during which he remarked, “I’ve never understood this ‘born-again’ thing, but I think I’m starting to get it.”

Granddad died on December 17, 2012, with his wife of 55 years by his side. He’d requested to be cremated, and my grandmother fulfilled his request. I had the honor of leading a memorial service in his birthplace of Currituck, North Carolina.

In the days since Grandpa’s death, I’ve often wondered whether the seed sown upon his soul took root. I have hope that God brought about repentance and faith in my grandfather before he died, but I cannot be certain. What I can be certain of, however, is that the words of Scripture are true: “The fear of man is a snare” (Prov. 29:25).

No matter what man we fear (even if it’s Grandpa), fear is a snare. Fear is a snare for us, and it’s a snare for those who need to hear the message that can save their souls. The gospel is the power of God for salvation (Rom. 1:16), and it is good news. Yet as Carl F. H. Henry observed, it is “only good news if it gets there in time.”

I haven’t always obeyed the Lord’s call for me to share the gospel. To this day several scenes haunt my memory. I know, however, that although I’ve withheld the gospel from some, God’s mercy extends to me. His grace abounds to undeserving rebels like me.

The conversation with my grandfather was one of the toughest I’ve ever had, but I’ve been sobered in the hindsight of his death. My fear appears quite shortsighted today, for at this moment he’s in eternity. He sees what we have only heard. Christ is more real to him now than when we sat at the kitchen table and read the Scriptures that pointed to the Lord of glory.

I trust that on that last day when we all stand before that great judgment throne, the fear of man will be exposed for utter foolishness. The weightiness of eternity presses us into deeper dependence on Christ to do what he’s called us to do—while we still can. To be paralyzed by fear of human opinion, rather than stirred to declare the truth that can deliver from destruction, is a most saddening tradeoff.

God has placed each of us in our families, neighborhoods, classrooms, and workplaces to be ambassadors of Christ (2 Cor. 5:20). We aren’t there by chance, and there is no time to waste. Pray for God to open doors for the gospel. Ask him to give you courage to speak his name.

I’m convinced that one day, when standing before his Son, those tough conversations will be among those we’ll be eternally glad we had.