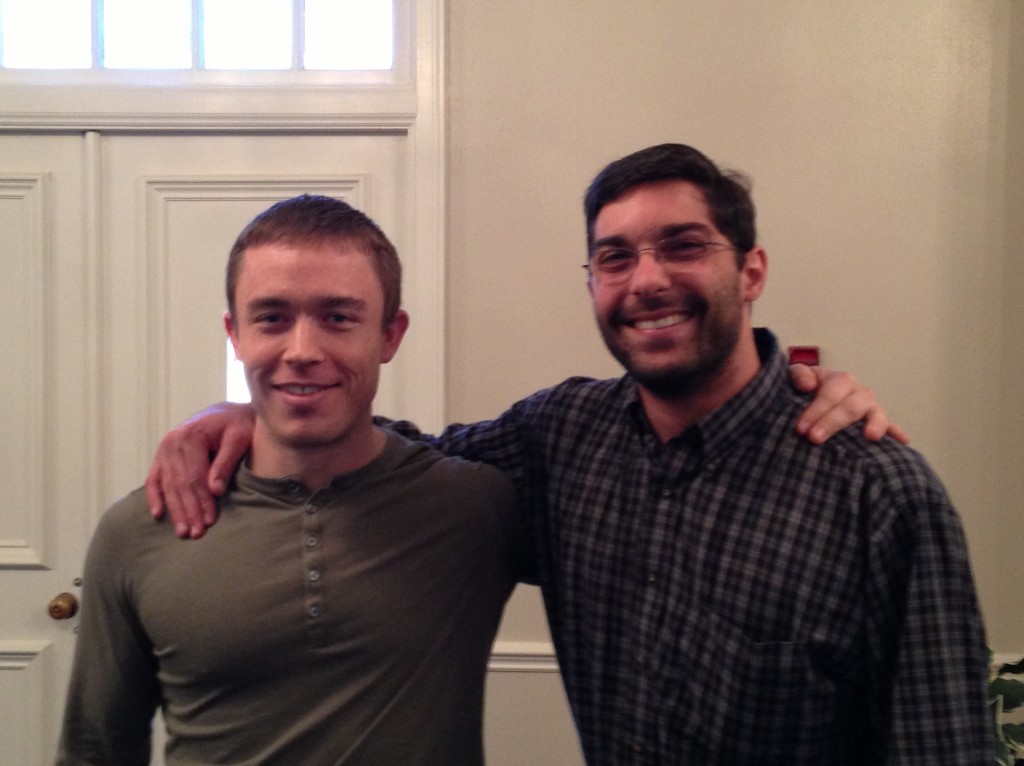 Scott (left) and Mark were long time friends. Now they are brothers for eternity.

Scott hated God. But God loved him anyway. I recently had the honor of baptizing this former rebel in a public display of his new found devotion to Christ. Be encouraged by the testimony he shared with our church from the baptismal waters on Sunday. And be challenged to keep sharing the Gospel with those whom you’d least expect to one day love Jesus.

For as long as I can remember I’ve believed in myself and looked to myself for guidance on everything in life. I thought if I just focus my efforts I could make myself loveable, likeable, competent, and just an all-around good person that others would affirm that I was in fact a pretty great person. With such a mindset, it’s not surprising to me now, nor probably to you, that my life was filled with anger, depression, self-loathing, and  a sharp distrust of others. Talk of God was a joke to me, albeit one that I tried to “respect” when I was in a good mood.

During the last 10 years, I’ve lived with a Gospel-believing Christian friend Mark, who, during many “intellectual” and “philosophical” debates never hesitated to share his belief in God and Jesus’ work on the cross.  It sometimes infuriated me that such a well-meaning, otherwise rational person could hold fast to such irrational, self-demeaning nonsense.  I’d say “how can you love someone or count them as a friend when you honestly believe they deserve eternal damnation?”  And he would say it is out of love that he shares the Gospel with people in hopes that they would be saved from that.  So frustrating!

But back in August, things began to change.  Mark and I met Claire, by complete chance (from my perspective at the time) at a bar in Old Town and we both were struck by her willingness to talk about God openly in such a situation, to Mark’s delight and, honestly, to my annoyance.  We all grew to become good friends over the following

months, though every time God was brought up I bristled.  I’ll admit, though, that I started to see something in their eyes that I hadn’t noticed before: a joy and a hope that I didn’t have and didn’t understand, and it made me curious.

In January, I found myself in the midst of a brutal storm of loneliness and confusion. I felt like my self-sufficient little boat had been smashed on the rocks and I recognized that I

had no hope in anything other than myself and I was failing myself again and again. So, in tears at work, I texted Mark and asked him to teach me what faith is.

Mark pointed my eyes in the direction of Christ.  He explained the crucifixion, and for the first time in my life, as I listened, the picture of Jesus on the cross became real to me.  I imagined His perfect life, His genuine love for people who treated Him with hostility and distrust, His patience with them, and the false accusations made against Him leading to

Him being nailed to a cross and mocked even as He was hanging there.  But more than the physical pain His Heavenly Father mercilessly poured His infinite wrath into Him on behalf of many people, including myself for the lies I’ve told, my lust for control over my own life, my slanderous attitude against Him for much of my life, my self-destructive tendencies, my anger, among so many other things.

I asked Mark to stop at this point so I could keep thinking more about what Christ had done and I prayed that God would show me the depth of my sins against Him. Every night

I prayed that I’d understand my sin which was helped by Mark and I watching John Piper’s sermons online. I was getting excited about reading the bible and hearing preaching here at Del Ray, but I still couldn’t call myself a Christian.

Mark asked if I understood the significance of the resurrection, and I told him I’d heard it, but I didn’t really feel like I understood it.  After he explained that without Christ’s return to life the penalty he took on the cross would’ve been meaningless, and we’d all continue to be under God’s judgment, it came together like two pieces of a puzzle. Later

that week I went to my window at work and repented of my many sins and asked for God’s mercy in the name of Jesus Christ.

Since then I’ve been told, and I’ve noticed, that my anger has subsided considerably.  My cursing stopped without my conscious control.  My distrust of others began to erode,

not to the point of foolishness, but when you recognize the struggles of others and see your own difficulties in them it is impossible not to have love for them. God has also put me in several situations where I was asked to share His word with others – once with a random person at the dog park, and once with my dad prior to a surgery he recently had.

I felt blessed that God would allow me to speak about Him and point people in His direction. But most importantly, I’m grateful for what he has provided for me in my life.  I am grateful that He called me to Him through two of my best friends.  I am grateful that He has given me a growing love for His word.  I pray in hope that I am suitable soil and

that He will never let me go back to self-worship.  I want to be baptized today as a public gesture of my faith in Christ and His work, and as a reminder of the death that I deserve and the life that I have been given, justified by Him in the eyes of the Father, and washed clean of my guilt by His blood and the movement of the Spirit.

Praise God for His mercy. Praise God for faithful friends who share the Gospel. Go tell somebody about the good news that Jesus saves sinners.