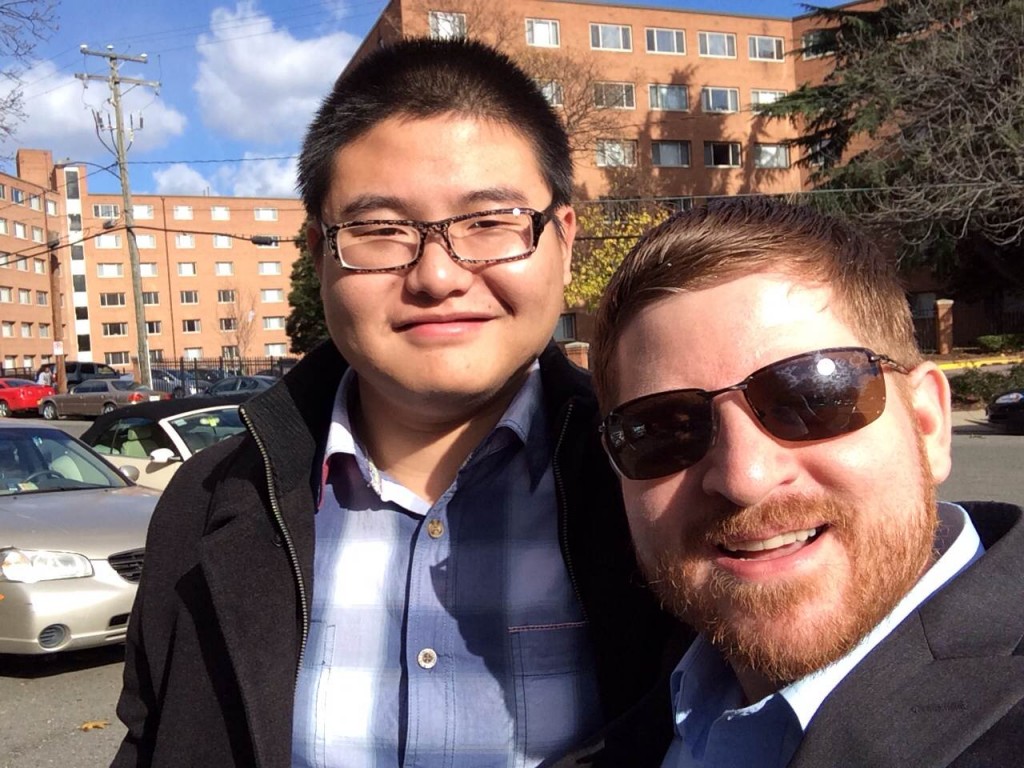 Stephen was an atheist who heard God’s Word through several faithful witnesses,    including his language partner, Michael.

This Sunday, our church had the joy and privilege of hearing Stephen Yin share his testimony as he was baptized to publicly profess His faith in Jesus. Stephen was an atheist at this time last year, but the Lord sought him and saved his soul. May we never give up hope in our sovereign God who is able to transform even the hardest of hearts.

My name is Stephen. I am from China and am studying Statistics at George Washington University. I came from a country where the educational system taught you that there is definitely no God in this world. In my country, it is pretty silly to believe in God and anyone who says they do is viewed as a loser. Growing up, people always laughed at those who said they are God believers, and I was among those who laughed.

However, from September of 2012, everything about me began to change. On August 14th, I arrived in the US from my godless home country. I attended classes, struggled with the language barrier, suffered from culture shock, but still tried hard to be a good student.

One day, I received an email saying there was a free English class in our university. I thought maybe that was good for my language problem, so I just decided to go. When I attended the class, I found out it was held by Capitol Hill Baptist Church (CHBC), but I didn’t know anything about these people.

In the first half of the class, we picked a topic and read some articles and talked about them with English speakers from the church. In the second half, we did a bible study. That was the first time I read a bible and learned things about Jesus Christ. I had no plans to read the Bible, but God had other plans.

At first, this did not make any sense for me. I just thought “well, I attended their class, it was free, and it seems like learning this bible can make them happy.” So I just continued to do the bible study. At the third class, I met a lady named Cindy. She taught me some basic ideas about Christianity. Before then, I had never known anything about this Jesus.

At the following week of the English class, Cindy brought me a bible with both Chinese and English (which is the bible I still use today). Since I now had my own bible, I would read some of it when I was bored because at that time I just took it as a story book.

Then one of my friends told me there was a free food party on Friday night where they offer Chinese food. After the food, they would have a bible study and taught Matthew. Most of my friends who went there together with me gave up because they thought the bible study was too boring. But for me, I thought it is good to learn something from there. Actually, I cannot tell why I thought so, but I just felt I like reading the bible and all of a sudden it was not so boring for me. Also, I get free Chinese food, so I kept on attending the bible study every week.

Soon after this, I got a “language partner” named Michael, who was supposed to teach English and have conversation with me. I spent a lot time with Michael meeting every week. I told him I was curious about the story of the bible so maybe we can talk about it. Michael taught me a lot about the Christianity, who is God, how our world was created, why we are sinners, and how can we be saved by Jesus. I had never heard about these things before.

During my third month in the country, my life became filled with trouble. My cost to live here was higher than what I thought and I was feeling lonely and homesick. When I was really feeling bad, I did not want to do anything. Then I just picked up my bible and discovered that when I was upset, reading the bible gave me a sense of peace. I talked about this with Michael, and he encouraged me to just keep on reading the bible and keep on visiting church with him.

At this time I needed to find a new place to live and moved in with Mark and Laura who invited me to visit Del Ray Baptist Church (DRBC). At DRBC, I learned the Christianity and Garrett preaches slow enough so I could really follow the sermon which really helped me a lot.

I still went to the Friday night Bible study every week. It took me about 2 hours to get back home after the bible study as the bus runs every 90 minutes. Also I had to walk about 1 mile at midnight to the house. Though this was a lot, I kept on doing it, which even astonished me. Then I realized that God had been changing my mind and making me want to learn his word enough that all this late travel was no longer trouble for me.

When I lived with Mark and Laura they taught me about how to try to live in a Christian way. Before living with them, the bible was something like literature, but Mark and Laura taught me how to think of this world and how to apply our faith in our everyday life. I began to try to hand in my life to God and pray and worship God in my daily life.

At DRBC, I met one of the elders, Brian. We talked almost every week after church and he told me something about the sermon message and my studies and my life. I could always ask Brian any question I had about life or study or Christianity. We talked much deeper about what does it mean to become a Christian and how a Christian truly believes in God.

It was then that I truly believed that God created us, that all of us are sinners, that God loves us and sent his own son, Jesus Christ to our world to pay for our sins. Jesus Christ, as a man and also God, come to our world. He is perfect and died for us on the cross and rose from death again. Only through the faith in Jesus and God, can we be saved. I know all of these and believe these are true.

But it was difficult to understand this thing called “faith”. Chinese people never really believe in anything when we grow up, so I did not know what “faith” really means. I talked a lot about this with Brian. He taught me a lot about my questions and suggested that I read Romans.

Michael and I went through Romans chapter by chapter. I also talked with Brian and Mark in the church at this time. At that time, I prayed often in my daily life, had handed my life to God, trusted him and tried to do the right things to please our Father as Brian taught me.

But I never thought about to be baptized. One day, when I was together with Michael having the lunch, Michael asked me some question about what I believe, then he told me, Stephen, if you believe in all of these, you should be baptized and tell everyone you have become a Christian.

I realized that, yea I do really believe, I trust our God, I believe in Jesus Christ who came here, saved us, and rose from death again, and that only through faith in Jesus we can be saved. As an act of His mercy, God led me step by step in learning his words.  Now I stand before you as a broken, repentant sinner, saved only by the amazing grace of my perfect Father who will never leave me or forsake me.  Today, I’d like to be baptized as a public display of what God has done in my life!